Gazprom has stepped back and ducked an LNG punch. It is a long way from hitting the canvas.

(Timera) European domestic gas production is in terminal decline, accelerated over the last two years by earthquake related reductions in Dutch supply. Imports of Russian gas and LNG are the two key sources of incremental supply set to continue to fill the gap.

Russian gas has gained significant market share across the last 5 years. Russian exports rose from 159 bcm in 2015 to 199 bcm in 2019 (based on volumes as measured by Gazprom, which are gross of Ukraine reverse flow).

That trend has reversed sharply in 2020. The Covid demand shock and acute temporary oversupply in the LNG market has seen surplus cargoes flooding into Europe this year. This has driven hub prices down to historically low levels and Russian import volumes have fallen in response, down more than 20% vs 2019 across Q1 – Q3 2020.

In today’s article we consider the market & strategic dynamics driving the 2020 decline in Russian gas imports. We also look forward over the next 5 years and set out why Russia is set to strongly reassert its influence on the European gas market.

2020: Russia steps back to make way for the LNG flood

LNG supply is largely price insensitive, with the notable exception of US exports which can be shut in at very low gas prices. In an oversupplied LNG market, the European gas market becomes a sink for surplus cargoes. 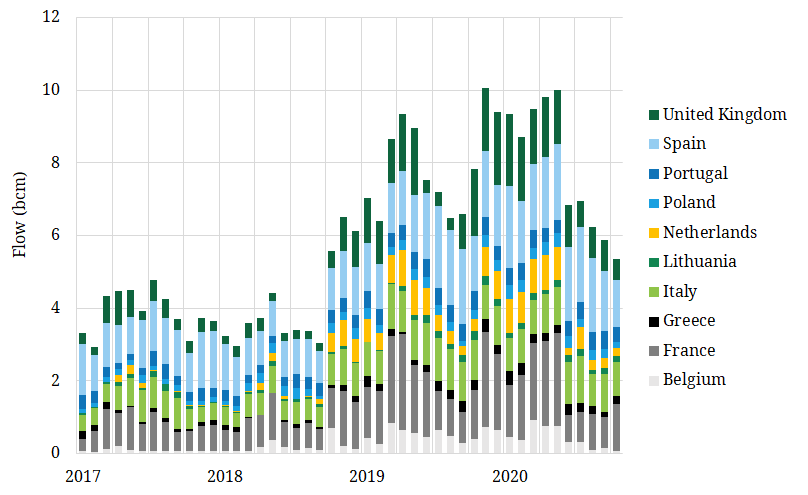 In addition to these market mechanisms, the volume decline in 2020 also reflects a strategic decision by Gazprom to pull back on supply in response to very low hub prices. This can be seen for example by Gazprom halting the sale of prompt volumes on its ESP platform in May.

Despite these drivers, Gazprom earlier this month announced a slight upwards revision in its 2020 export volume target to 170 bcm (vs the 167 bcm target announced in Q2).  This target implies a strong increase in export volumes across Q4, which will be helped by a sharp recovery in hub prices across Q3.

The left hand panel of Chart 2 also shows Gazprom’s continued preference to flow gas via the Nordstream route, with flows via Ukraine and Poland bearing the brunt of the volume reductions.

These charts do not show flow volumes to Turkey (e.g. via Bluestream and the new Turkstream pipeline), which have seen a sharp decline in 2020 as buyers sourced cheap LNG as an alternative.

The events of 2020 have confirmed that Russian price response is a key market clearing mechanism in an oversupplied market, alongside European power sector switching and US export shut ins.  But the Russian pullback is likely to be a temporary phenomenon. Gazprom has stepped back and ducked an LNG punch. It is a long way from hitting the canvas.

The role of Russian gas over the next 5 years

The recovery in European hub prices since Q2 is evidence of both the global LNG and European gas markets rebalancing. This is being supported by a recovery in Asian LNG demand, pulling LNG supply away from Europe since May (as can be seen by the sharp fall in European LNG imports in Chart 1).

Alleviation of oversupply in the LNG market across 2021-22 will likely to support a relatively rapid return of Russian import volumes back to 2017 – 19 levels. This is consistent with Gazprom restating a long term target of 200 bcm of annual exports to Europe in Q1 this year.

As the oversupply of 2020 subsides, there are currently two important drivers of European gas market pricing dynamics:

These two drivers are set to remain a dominant influence on European hub prices over the next 3 to 5 years.  But as the LNG and European gas markets rebalance, Russian gas flows will also become increasingly important.

As the European gas market tightens, the periods when Russian gas represents the marginal molecule of supply will increase. In this environment Russian routing and flow cost dynamics are key.

The Nordstream 2 pipeline may be temporarily delayed by geopolitical tensions, but is likely to come online at some stage in 2021. That will allow Russia to increase its ‘baseload’ flows via the Baltic route from 55 bcm currently. But Gazprom still faces EU regulatory restrictions on holding more than 50% of capacity on key pipelines which will likely limit Gazprom’s NS1 & NS2 flows to well below the combined 110 bcm nameplate capacity.

Russian flows across the Polish and Ukrainian routes into Europe are set to become more dynamic. Gazprom’s long term transit agreement with Poland has now ended, leaving it to source shorter term capacity to support flows. Gazprom has a new 5 year transit agreement with Ukraine, which covers a 65 bcm ‘send or pay’ volume in 2020 and 40 bcm in subsequent years. Additional volumes via Ukraine will also need to be supported by shorter term capacity purchases.

This leaves Gazprom in a position where it is more dynamically optimising its portfolio of supply obligations, long term pipeline capacity, storage and import flows. This optimisation will be driven by market price signals and flow route costs.

Relative route cost competitiveness will change significantly over the next 5 years as sunk costs of some existing long term capacity bookings expire. This has the potential to significantly change the flow patterns of Russian gas both to and within Europe. Gazprom’s portfolio optimisation will also be impacted by the 2021 German hub merger which will reduce transit costs across Germany (increasing the relative attractiveness of the Polish flow route vs Ukraine).

The European gas market has been very focused on LNG flows and Henry Hub across 2019 and 2020. But understanding the impact of Russian flows on market pricing and midstream asset utilisation will become increasingly important over the next 5 years.

European gas demand down by almost 25% in November

European gas demand down by almost 25% in November